This is the English version of my diary entries from autumn 1989 in East Germany. The German version is HERE. I wrote in my diary since I was age 14 and I also did so during the „hot“ autumn 1989 during my studies at an Art School in Schneeberg, when I was 21 and engaged in the East German opposition. Even today, I get goose bumps when I read these old lines and those weeks come alive again. Not only memories come back but also emotions. This was a phase of very intense emotions, of fear and panic, euphoria and hope, of despair but also of feelings of invincibility and the experience of courage which one had not thought to be possible to have.
Since these very personal notes may give others an insight into this time, I want to publish them here. In my book „Mauern einreißen“  (tearing down walls) I have published some of these texts abreviated. In this book I also tell, what this time meant to me altogether and why it became a source of unlimited energy for me. Why because of these experiences I believe today that even impossible and big societal change are actually possible. More documents – manifestos and lists of the New Forum mentioned in my diary – but also lots of other original documents of the „Time of the Change“ are published on this Website (LINK). Some more pics of 1989 can be found too (LINK).
Below is a transcript of my diary. I only cut out private content, you recognize it at „(…)“. Explanations of abbreviations etc. are in italic in brackets. Some names are only as initials. This is my first blog post about my diary notes in autumn 1989, more will follow.
04.10.2014, 23:15 Uhr, Schlema, WH FAK DSF 3
(Student home, Fachschule für Angewandte Kunst, Strasse der DSF 3)

„Inapprehensible, why I did not write for such a long time. Maybe I just couldn’t start? Horror Vacui because there is so much to write? Often done in thoughts. Oh my, so much politics, politics, politics. It never occupied me as much, filled up my life and guided me. 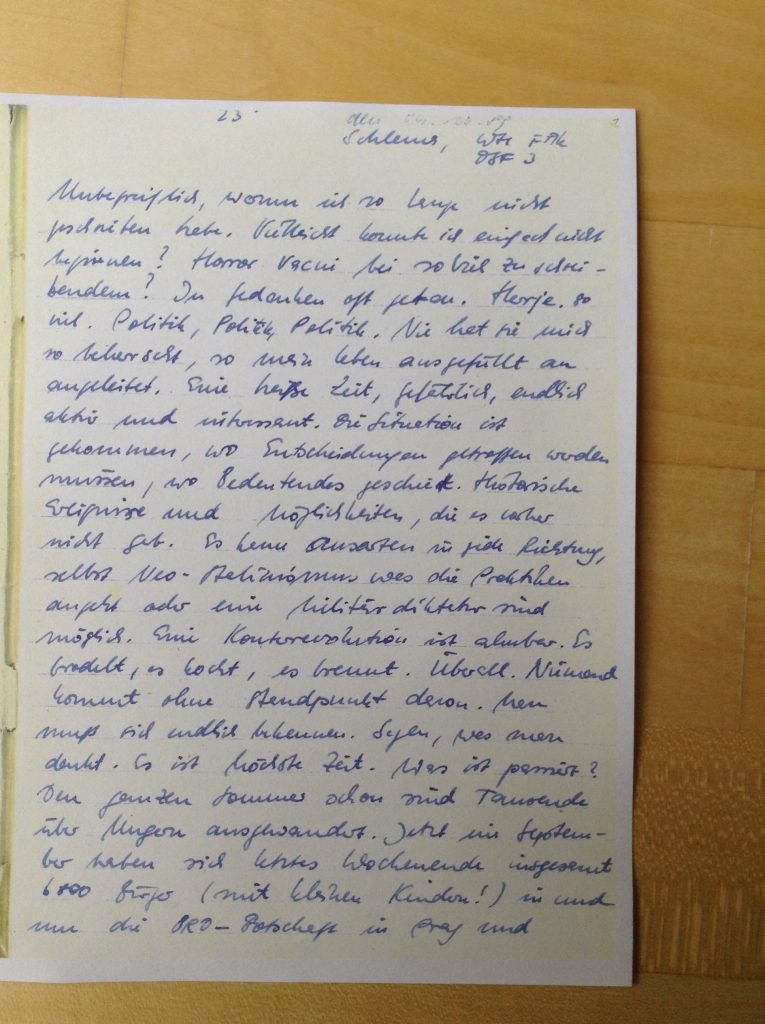 A hot time, dangerous, finally active and interesting. Nobody gets away without taking up a position.

A hot time, dangerous, finally active and interesting. The situation has come, where decisions have to be taken, where something significant happens. Historic events and opportunities, which never existed before. It can degenerate in any direction, even neo-stalinism as to the practices applied or a military dictatorship are possible. A counter revolution is in the air. Things are bubbling beneath the surface, its boiling, its burning. Everywhere. Nobody gets away without taking up a position. Eventually, one has to confess. Say what you think. Its high time. 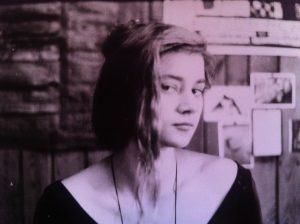 What happened? The whole summer already, Thousands emigrated via Hungary. Now, in September, last weekend a total of 6.800 citizens (with small children!) occupied the West-German embassy in Prague and several 100 the one in Warsaw. On canvas and in tents and under undignified conditions some of them spent weeks. 1 medical doctor for all, who a long time ago refused to assume  responsibility. Of 50 kids, 40 had diarrhea. Genscher himself anounced the solution on Saturday – emigration – passing through the GDR with East German Railways. An unimaginable rejoicing. Strange pictures, just like Emigrations of Nations after a war. Like flight from barbarism. Hugging, tears.
In Dresden and on the way, more and more people jumped (onto the trains). A guy from Müncheberg (my home town), B – brother of Achim – was in TV, thanking the polish government and the Solidarnosc for their help. What a view! The embassies were to be closed. But West Germany did not stick with it and today in the morning it had been 11.000 people (!) again around the embassy. Yesterday, the news that the visa free travel to Czechoslovakia has been abolished until further notice. One shock after another. Now only Rostock and Suhl are possible without a visa. Hurray. No more surprise visits at Gustavs! 11.000, and Kuno (my brother) had thought about travelling to Prague. Had he known how fast things are happening, he would have left long ago.

Something has to happen, eventually!

Its getting hotter in the school too. Bertram brought me a NF-Info-paper (NF= New Forum, major oppositional group) and a members list as well as a broshure about neofascism in the GDR. The Info paper we copied by type writer several times (in the atelier office) and distributed it amongst people. Here I recruited Sylvia and Gundula only. After the last events (Karsten is being tailed and his room has been entered too) he decided to sign too, and Annett and some others will follow. First I have to get hold of the list again, stupid me, I left it at home. I can be proud of my family. Father, mother, sister, her husband, my boyfriend – they all signed. My mum after overcoming hesitation. Her experience with the Stasi (East German secret service) was not without effect. Where they had told her: „you are lucky if you can see your kids again… My father was convinced easier. Something has to happen, eventually! (…) 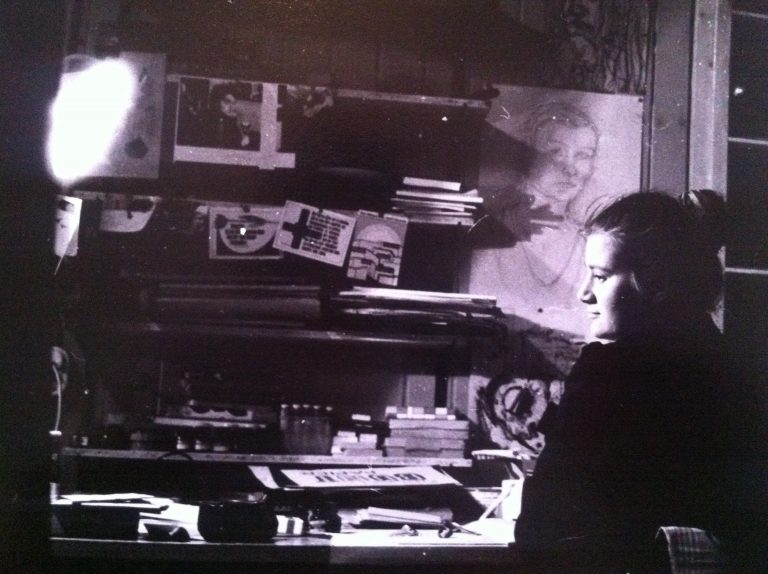 We went to Anka Goll, it turned out that she wanted to visit us too because of the Forum. She also had the info paper and the list. We refuelled courage. On 16th October, they will come over, when E. is visiting too. Here we have nearly daily meetings. It was about the question: party – yes or no, if yes, then how. With party we mean the Keilberg-Festival on 8th October. It already was announced everywhere and published in the press, and a lot had been organised. In vein. Our students fought courageously. We debated long and many times. Only on Tuesday – after the news regarding Czechoslovakia we called for a boycott.

Honesty is needed, not to celebrate now doesn’t mean to ignore 40 years, but to recognize them.

We weighed all, but then came unanimously to the conclusion that we have to disobey. That in the current situation, which shows an unforseen flight movement, it is impossible to celebrate with a festival the 40th anniversary of the GDR. Even if we had come with posters or dressed in black. Honesty is needed and not to celebrate now does not mean to ignore 40 years but to recognize them. These last weeks are the consequence of these 40 years, impossible without the latter. Celebrating? Never.

Everyone expects grave events, and that it „will get much worse“

In Leipzig, on Monday, the biggest manifestation since 1953, 20.000, the Stasi „loaded“ some on trucks, taken by hands and feet. Horrible, its starting. At the talks with the professors it was made clear that it could anytime come to a situation either comparable to 1953 or unprecendented. Everyone expects grave events, and that it „will get much worse“. Oh my. But finally something is happening and a birth comes always with pain.

Of late, my mail is arriving opened in Müncheberg. Nice, how fast they react. 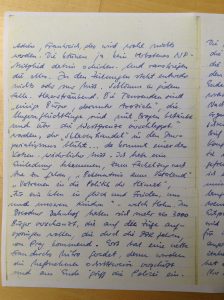 Of late, my mail is arriving opened at Müncheberg. Nice how fast they react. Adieu, France, it will come to nothing. They can hardly send there a forbidden NF-member. And they find out everything. In the papers there is nothing or bullshit. Bad in any case. Hairraising. The Thousands are „some citizens, amongst them anti-socials“, the Hungary refugees had been „drugged and dragged over the Western border“, the „slave trade“ into the imperialism is florishing… you could vomit. Disgusting bullshit. I received an invitation, to take part in a torchlight procession in Aue, „commitment to the fatherland“, „trust in the politics of the home country“, „for a life in happiness and peace, for us and our children“, what a mockery. The train station at Dresden had been occupied by more than 3.000 cititzens, who wanted to jump on the traings which passed through the GDR, coming from Prague. First, a woman was talking nicely into a loud speaker, than the measures had been aggravated step by step and finally, the police intervented. The people were laying themselves on the tracks to stop the trains.

One is suprised by the big friendship to China, remembers the June rebellion and its so bloody end. Would our soldiers take part in something like this?

One is surprised by the big friendship to China – remembers the June rebellion and its so bloody end. Would our soldiers take part in something like this? What will I do at 7th Oct.? Go to Berlin? Something will be happening, for sure. Has to. The tension calls for discharging. The letter from Gabriele (Italian pen friend) disappeared. Meanness. Simply confiscated. The one from Melissa (American pen friend) arrived opened. She wrote really friendly, which made me happy. Florence (French pen friend) offered me a stay, should I need one, she would be always there for me and I could stay as long as I needed to. From Gabriele, at least the parcel arrived, but it took 5 weeks, despite express delivery. (…)

This was the start of a little series of postings on my diary of autumn 1989 in East Germany. Further posts will follow in the next days. Should you want to read more from me about my time in East Germany, you can read my book „Tearing down Walls“ (which only exists in German so far :-().
Further Information around the Fall of the Berlin Wall ’89: