„Of people, who had to stand naked for hours against a wall while being interrogated, of women, who where loaded onto trucks and driven to the outskirts, abandoned in the middle of the night on a field“

This is the English Version, the German version is HERE.
My diary entriy of 15th October 1989
This is part 3 of my series „My diary – 25 years ago – Autumn 1989“. Part 1 is a diary entry of 4th October 1989, the English version is HERE, the German version is HERE. There, you will find also a little introduction to this series. Part 2 are diary entries of 6th and 9th Oct. 2014 (English: HERE, German HERE). On my homepage there are many more documents from the time when the Wall fell (LINK) and some pictures of 1989 (LINK) as well as information about my book „Mauern einreißen!“ („Tearing down walls“ LINK). However, all these pages are in German…
I took out some parts which are private, you will recognise this at „(…)“, explanations come in brackets with my initials: „(ADB: explanation)“ or (= explanation).

Monday, 15th.10.1989
Today, Dietel (=dean) is back, I am here – Müncheberg, Eli too, Anka Goll has gone. Tired, 10pm, shattered, politics is nerve racking, straining, but positively! We are so many! VBK Frankfurt (=Association of Fine Art Artists) -> Resolution. From the VBK Berlin already 3 new ones. Ours (ADB: I meant our student Resolution of the 9th Oct 1989, German blogpost and Resolution are HERE) must have arrived in Berlin via D., I heard in the Tagesschau News about students proposing independent student representations – it can only refer to our identical phrase in our Resolution. I had copied it with typewriter many times. I received a more concrete, new Forum-Text (Neues Forum = oppositional group) from Golls (=friends). I am still typing it. Too tired for today. Maybe tomorrow? (…) In Berlin a rock concert for democracy yesterday, Karat, Pudys, Pankow, Silly – they all took part. Hurray! In Leipzig, 10.000 out today, yesterday 15.000 peaceful demonstrants in Plauen. Hurray! Process cannot be stopped. People’s humour: Honecker (=General Secretary, head of East German government) had been operated at his gall bladder. He laid off the surgeon, since he had meddled with his inner affairs. Later laid off the internal specialist, because that one had prescribed a „reform-diet“. „Formerly, it was said people without space, now its space without people“. Hungary is now entirely closed. Due to holiday traffic 4.000 (!) had fled last weekend. In Warsaw again 1.400, they expect 150.000 emigrants by the end of the year. Really bad. ZK (=Central Committee of Socialist Unity Party): „We will not shed any tear over those, we can do without traitors“ – so bad.

Kuno has been told, his problem will be solved this year… will I ever see him again? (ADB: my brother had filed an emigration request). He does not believe in changes to happen. Anka G. told many good things, the Forum won over the whole workforce of some companies, including their management, masses. So many, an idea captured by the masses! There is the truth and then comes Hager (=Kurt Hager, Member of Central Committee of leading socialist party) and says, we have so many platforms and forums, we don’t need new ones, anti-socialist ones; the history of socialism was a history of reforms anyway…how ironic, he gives in, to not have to leave the positions of power. No way, you all have proven your inability long enough!
There are horrible accounts of how the arrested of the 7th October where treated (ADB: about this more in my diary entry of 9th Oct 1989 – LINK). Of people who had to stand naked for hours against a wall while being interrogated, of women, who where loaded onto trucks and driven to the outskirts, abandoned in the middle of the night on a field. The first ones hitchhiked back and informed a police inspector who became furious and had all other women brought back by taxis. Some are still human. Anyway, the School has no longer the argument of anti-socialism against the Forum. In their new declaration it is decribed precisely, to make the GDR better, to reform it, within socialism, for socialism and without reunification. Tired. From Eli (=friend of my mother of their student times, living in West-Germany) a super Philips double deck recorder, surely very expensive. She did not take my money. (…) It is superstylish, rounded corners, black, leight weighted, beautiful, perfect sound. Karsten will be amazed. Looking forward to share ananas and Nutella with him. I also have now 5 fine cassettes. Alexej (=russian pen friend) put two Sputnik in the mail, I hope they arrive, and I hope they are in German! Should be here soon. (1)
The Stasi (=East German secret service) will surely leave me alone soon, since they will notice that I became an enemy (2). (…) Sebastian’s (=name changed) visit on Sunday was cancelled, his mother received a telegram the evening before – „because of technical prison regime reasons no visit possible“, full, or what? (3)

Footnote explanations:
(1) The Sputnik was a russian monthly readers digest, which early showed the spirit of Glasnost. As open and with criticism as the Sputnik was written, we didn’t know media in the GDR. Therefore, the Sputnik had become a sought-after journal. However, in autumn 1988 (one year before the Berlin Wall fell), the Sputnik had been forbidden and censored. At that time, I wrote a complaint to the Ministry of Postal Affairs which had been replied 2 months later with rather empty words by the ministry. Faster was the registration of my complaint in a file on me by the secret service Stasi, which had been opened for this reason. 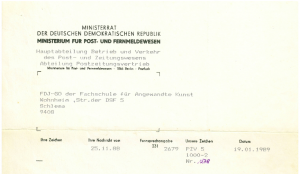 (2) With a fake letter, the Stasi lured me in September 1989 to a Youth Travel Office, where the Stasi guy tried to blackmail me into a cooperation as IM – Informal Employee. They wanted me to spy on my fellow students and tell about activities at the Art School. They offered in turn a permission for me to take advantage of a scolarship I had won from a french Art University. Furthermore, they threatened that my father would lose his job as municipal medical doctor, should I refuse to cooperate. My trip to Paris was cancelled due to my refusal, but at least my father kept his job.
(3) Sebastian has another name in real life, he is a friend of childhood days, who was imprisoned in Halle. I pretended to be his fiancé to get visitor rights and to get him the permission to write me. There will be more about him in later posts.

This was the 3rd part of a small series of diary entries from autumn 1989 in East Germany. Further posts will follow in the next days. Should you want to read more from me about my time in East Germany, you can read my book „Tearing down Walls“ (which only exists in German so far :-().
Further Information around the Fall of the Berlin Wall ’89: