„He had written a letter to me, with detailed information about what happened at 5th and 7th Oct. (strikes, hungerstrikes) and in which he had asked me to make it all public. Somebody denunciated him and the letter was found. Now he is in solitary confinement, might face a trial on ‚illegal transmission of messages with subversive/anti-government content'“

This is the English Version, the German version is HERE.
Preface:
This is part 4 of my series „My diary – 25 years ago – Autumn 1989“. Part 1 is a diary entry of 4th October 1989, (English: HERE, German: HERE. There, you will find also a little introduction to this series. Part 2 are diary entries of 6th and 9th Oct. 2014 covering the upheavals around the 40th anniversary of the GDR (English: HERE, German: HERE). Part 3 is the diary entry of 15th Oct. 2014 (English: HERE, German HERE). On my homepage there are many more documents from the time when the Wall fell (LINK) and some pictures of 1989 (LINK) as well as information about my book „Mauern einreißen!“ („Tearing down walls“ LINK). However, all these pages are in German…
I took out some parts which are private, you will recognise this at „(…)“, explanations come in brackets with my initials: „(ADB: explanation)“ or (= explanation). More detailed explanations will be found in footnotes. 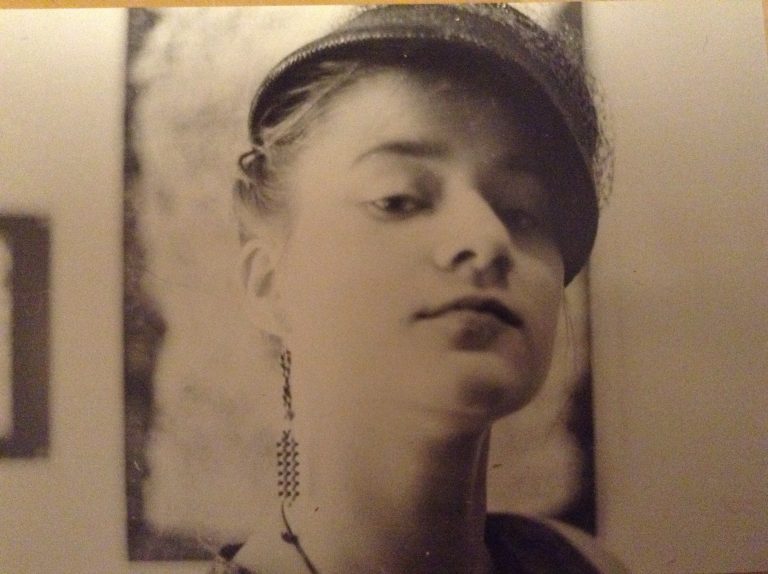 Selfportrait as a student at the Art School in Schneeberg, app. 1989

I just came back from the citiziens forum Schlema (= small municipality where I lived), after 3.5 hours discussion. It was not overly exciting. In the chairing body only one woman – she wrote the minutes. Young only the representative of the Environment (CDU = Christdemocrates) and the pastor, who spoke most intelligent, with fine irony and accomplished polemics. One of the few, who put the „bananaproblem“ into perspective and pointed to more fundamental things. He was applauded. But also the mayor himself spoke good, he could win my vote at the next elections. Sometimes it became apparent that the people are not used to free dispute. Some became abusive and there had been ad hominem, unqualified attacks. Its a shame how shortsighted many people still are. But great how many there have been and how much they engaged.

The guy from Radiation Protection was rather embarassing. Everything here to be totally non-dangerous. (1) Some citizens became slightly racist. About the DSF Street (= street where our student homes were) one complained that there was a rehabilitation workshop, a home for foreigners and a workers home for soldiers…instead of appartments for citizens. The FAK (=my Art School) was not mentioned by the lady when listing all evils, most likely only because she sat right behind us. It was a shame. The med doctor replied accordingly. Everywhere debates take place, yesterday there was the Schneeberg-Forum. On Monday, we had decided on the foundation of our student council, 2 representatives for each study year and 1 for Markneukirchen (=offsite campus for artistic music instruments construction), which is T., a guitar maker from the 1st (=study year), good guy and committed. He would rather debate with us instead of with those deadheads. His first deed: Request a foreign language selection by majority vote, or in clear text: English instead of Russian.

Somebody denunciated him and they found the letter. Now he is in solitary confinement.

Yesterday, I got a letter from Halle, written 2 weeks ago by Sebastian (2) and smuggled outside (=the prison). A week ago, a letter from an unknown woman from Karl-Marx-Stadt, with the advise to use another return address and to write harmless content. Oh my, Sebastian, the letter killed me. He had written a letter to me, with detailed information on what happened (= in the prison) the 5th and 7th Oct. (strikes, hungerstrikes), and in which he had asked me to make it all public. Somebody had denunciated him and they found the letter. Now he is in solitary confinement, might face a trial on ‚illegal transmission of messages with „subversive/anti-government content“, 3 times daily he gets food through a hole in the door, a glimpse of the street through the small window, thats all. He receives nearly no more mail from me. He saw them in their files, my letters. I am writing now very frequently, using various sender addresses, Bertram wants to write him too, I try to express myself harmlessly. Poor Sebastian!

I am now busy trying everything possible to get him out of there. Still yesterday, I wrote a letter to the prison director (3), with the explicit request, to give me as the fiancée information about the reasons of his tightened arrest conditions since I had not received any news for over 8 weeks, or to at least allow for a consultation. They will not be able to get rid of me just like that. They want to take away his allowance to write to my address, prohibit my visits! I have asked everybody here, whether they know a legal consultant who is trustworthy. Eva provided the address of the Superintendent (= of the protestant church) and of a lawyer in Halle, both via her uncle, and he via his ev.-meth. pastor. After a long struggle with telephone technology and the secretary of the lawyer, I have achieved a lot. Tomorrow, I will drive to Halle, outside to Neustadt, to Little Kathrin, who will give me keys (=for her appartment), then drive to Halle center, past 9pm I can talk with the Superintendent. Everybody is happy about the illusion of success, the „Wende“ and the „Progresses“ but at the core, nothing has changed.

At Saturday, I can call the lawyer to make an appointment for that same day. He was most friendly and promised to help, should it be possible. There is solidarity after all, I am so happy! If only Sebastian knew about it! I also have some connections to Berlin, to lawyer Giesinger, he deals with cases of the 7th of October, amongst them Maria. I also asked B. for help, his Bishop-father surely knows somebody. Via Petra I contacted the New Forum, they too may know somebody who can help. I am so excited! Something eventually has to change! Everybody is happy about the illusion of successes, the „Wende“ and the „progresses“ but at the core absolutely nothing has changed. As if there was excemption from punishment for convictions and political opinions… ha, ha. Solitary confinement, poor Sebastian. I would so much like to help you. (…)

We will see our Little Kathrin the last time tomorrow. She already received her circulation slip and will soon be in Kassel.

I already received 5 post cards from Padova from Gabriele (=ital. pen friend). (…) We will see our Little Kathrin the last time tomorrow. She already received her circulation slip (4) and will soon be in Kassel (= West Germany). Our third Kathrin will only finish her studies first. Her boyfriend received his slip too. Now its already 3 out of 20 designers. Can we afford this?! In this year, instead of over 100 we only have 40 applicants, a catastrophe. FAK (= Art School) anounced open study places… unthinkable before.
***

(1) Our dormitories had been in Schlema, Erzgebirge, an uranium mining area of the Wismut. We were surrounded by radiating mining dumps. They built fundaments out of burden material, the soil was perforated by old cores, out of some of them, radon gas was discharging and irradiating the environment. When I told my father, a medical doctor, that I wanted to study at an Art School in Schneeberg, he told me of the diagnosis „Schneeberg-Lung-Cancer“… a frequent disease of miners in that region. During the political Turnaround in East Germany (=Die Wende), that issue had been often debated. Lateron, radiation had also been measured. In our student homes they measured 2.000 Becquerel. The legal limit in West Germany was 60 Becquerel… Somewhen after the Iron Curtain fell, the Federal Minister for Environment and Nuclear Energy, Klaus Töpfer, came to Schneeberg. That was not much better. He recommended a woman who had 30.000 Becquerel in her home to open her windows more often, to make the Radon gas go away. It was in the middle of a freezing cold winter.

(2) Sebastian has another name in real life. A friend of childhood days who was imprisoned in Halle. I had pretended to be his fiancée in order to get writing and visiting rights. There had been protests in early October in that prison too, of which he wanted to inform me in his smuggeled letter. At that time, I wrote him colourful letters nearly daily and I nummerated them so he could see, how many letters had been censored.

(3) I never received any answer to this letter from the Halle prison. At 22nd Nov. 1989 – in between the Berlin Wall had fallen – I wrote another letter to the prison director. But I did not get any answer on that one neither. The second letter is linked HERE. With the progress of the East German revolution, a few months later, an amnesty had been passed and my friend got free again.

(4) A so called circulation slip („Laufzettel) was given to those who had requested their official emigration once their request got approved.  With this slip they had to run from authority to authority to get all sorts of confirmations, and eventually, handover their papers, in order to receive the emigration document.
***

This was the 4th part of a small series of diary entries from autumn 1989 in East Germany. Further posts will follow in the next days. Should you want to read more from me about my time in East Germany, you can read my book „Tearing down Walls“ (original title „Mauern einreißen!“ which only exists in German so far :-().
Further Information around the Fall of the Berlin Wall ’89: