„It was so unbelievable, you pass through it as if yesterday, there had not been a death field with mines, electric barbed wires and and and, everybody passed by, just like that, it was totally normal. The reception war equally indescribable. Total strangers hugged each other. Westberliners clapped, everybody laughed and cried. Never in my life I will forget this.“
This is the English Version, the German version is HERE.
My Diary notes of 13th November 1989
This is part 7 of my series „My diary – 25 years ago – Autumn 1989“. Earlier parts are linked at the end of this post, as well as documents, old fotographs, and my book „Mauern einreißen!“ („Tearing down walls“ LINK). However, except for the diary parts, all the other pages are in German… I took out some parts which are private, you will recognise this at „(…)“, explanations come in brackets with my initials: „(ADB: explanation)“ or (= explanation). More detailed explanations will be found in footnotes (numbers in brackets) at the end of this post.

Today is the 13th Nov 89, 11:15, Main Station on Monday
I still don’t get it, one hour ago I sat down in the S-Bahn Charlottenburg…coming from Riki (1) where I lived a weekend. Such a full one, crazy, indescribable, God, give me words to express the extent of emotions – impossible. Trying? 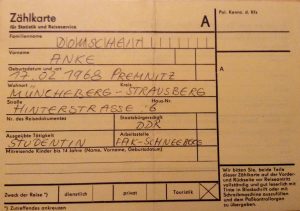 Such a „Counting Card“ I had to fill in to cross the border at 11th Nov. 89, however, nobody ever wanted to see it at the actual border

After the sadness on Thursday, washing on Friday morning (2), U. comes into the bath and is beaming – well, what are you saying to our victory? – I did’t know anything, then he talks about the Wall-atrophy… I run to the radio and hear it myself, everybody is allowed to go to the West, just like they want. Unfathomable. With G. I ran immediately to the Police and in 1 hour, we had our Visa. (3) This day was over. Not a bit Design done. Breakfast celebrated with G., one little Liquor was drunken. Called home and sent the parents to the police. Skipped History of Art (-lesson) and drove home. Riki had already gone home. Saturday morning by car off to the new border crossing Bernauerstrasse – Brunnenstrasse, the father pushed his way through, we stood 1 hour, the queue was endless, but it moved forward all the time. Just holding your ID card up. Around us, broken walls, construction workers, border personnel. I was beaming at one of them – they too are happy now, in spite of the stress. On top of the Wall sat West-Berliner youngsters, clapping their hands and waving, I was tearing up too. Everywhere those Westberliners, laughing, waving, uncountable TV teams (maybe M. saw me?). A woman was giving away Nimm-2 sweets, another one roses, white and red, Kaiser (=super market chain) distributed Kaiser-Coffee and chocolate – we looked for a bus and then drove by S-Bahn to Riki. We arrived at lunch time. What a turmoil, so many people. Even the buses are much nicer, the Wall is so colourful, „sauer macht lustig, Mauer macht frustig“ (=literally translated: „sour makes you happy, wall frustrates you“), funny slogans everywhere. Riki lives in front of the Aztec (=jewellery shop), in the Hektorstreet, close to the Ku’damm, very close. A nice old buildings corner, 4th floor, giant windows (in the entire quarter), view over the roof tops, beautiful. A bright, uncomplicated appartment, adorable. Amazing pictures, 2 cats…nice. Son Emil with long hair, 20 years old, a to-be-percussionist. I had a room just for me. My parents went back home at night. Before, we (me on my own) strolled the Ku’damm up and down. I met Simone G. (=class mate) in the Ku-eck in an Indian shop – the world is small (…) Müncheberg (=my home and school town) is everywhere. Right at this place – directly behind the Brandenburg Gate – I stood with my mother on top of the Wall. An unforgettable moment in an europhoric mass of people. A magical moment. Pic: Wikipedia Commons, Link: http://en.wikipedia.org/wiki/File:Thefalloftheberlinwall1989.JPG, Author unknown, Reproduction: Lear 21 from a public foto documentary wall of the Berlin Senate

At 6pm we met at Riki’s place and had dinner at an Italian, at the street which is the prolongation of the Strasse des 17. Juni. The waiters were running, with red aprons, the food was heaven, the Chianti rosso was great and quite strong. The father had calamari (in rings), Riki and my mother had a giant pasta plate with fillings, mushrooms and sauces. I had a pizza calzone with mushrooms, cheese and ham. Starters were fennel, filled pepper, olives, pickled trout (fantastic), artichokes, somehow treated tomatoe (unidentifiable) (4), filled mushrooms, heavenly. I thought I would burst, it felt pity for every bit leftover. We ate everybody from everything, the pasta was the best of all. The waiters whizzed and were beaming. Once we had been replaced at another table, it was so busy there. Riki invited us. Unforgettable everything. Viva la vita, viva l’amore – the waiter when I said something about moving to another table: „that brings life into the house“, so amazing, everything.
When we were leaving, the restaurant owner stopped us at the exit, whether we would not want an amaretto or the likes as a good-bye drink – we were easily convinced, lead to the back of the restaurant and the owner treated everyone of us to a drink, a sambucco for me (anis, lighted, fine and sweet), amaretto for the father, champaign for the mother. The boss was thrilled to have us, he had only slept 2 hours, went at 3am after work to the Wall to watch (5). Everything was so funny. I look forward to the Italian G. (=pen friend, he had invited me).
Time was flying. The parents went home, I was studying maps with Riki. M. lives north of New York, not too far. Boston is not far neither. Riki’s son will soon be half a year in Hollywood, at school, thats in California. I look so much forward to travelling! Padua (= where my pen friend lived) is very close to Venice – a dream! In Amsterdam, I even found the Helmerstraat of Wiel (=dutch pen friend), a long street. Amsterdam makes a decent impression. I slept like an angel and only dreamt of Italians, waiters who were running in the courtyard, serving. (…) I wanted to get to Leipzig already yesterday. I will just come today, hopefully they (=my friends) are still there. I will still make it to the demo (=THE mondays demo). Tonight we want to celebrate. (…). I will now go to Schoeneweide, surely have some more time there.

(1) This is the westberliner documentary film maker Riki Kalbe, a friend of my mother, with whom we enjoyed a close friendship. She documented the changes around the Potsdamer Platz after the Fall of the Wall with fotographs. Riki was affectionate and had a great sense of humour, but she died in 2002 far too early, after already her son Emil, a talented musician, had died at age 30. My memories of the Fall of the Wall in 1989 will forever be connected with Riki and her contagious laughter, her hospitality and with inner pictures e.g. of fotographs she had taken and turned into post cards, or maps which hang at her walls in her appartment, or of the small kitchen, in which beautiful ceramics piled up and where we enjoyed turkish coffee and red wine. (2) There was a common wash room in our student dormitory, a wooden barack. I meant this – unisex – wash room in my diary. It was, however, no more the old wash room, which you see at the picture above, but a new one, with real tiles at the walls and tiled shower cabins, not a steel-sheet cabin like the one we had in my earlier study years (where you see a fellow student stepping out).
(3) In the news they said that you need a stamp from the police, hence we went to the registration office, which belonged to the Police to get this type of visa. We also got a „Counting Card“, which I filled in but which nobody ever wanted to see when I passed the border to the West.
(4)  My very first italian meal….even until today the most delicious italian food I ever tasted. Maybe also because of the circumstances, but it really was heavenly. I described the food with so much detail, because none of them were available in East Germany. No Calamary, no filled mushrooms. And I had no idea how dried tomatoes look, thats why I described them as „unidentifiable“.
(5)  Only at our leaving the restaurant owner noticed that we had been coming from the East and had had our first western meal. Thats why he invited us in again, to celebrate together. It was a magic moment of joint happiness.

This is my last post of the series „my diary 25 years ago“, as a bonus, below a postcard,which I wrote a few days after the Fall of the Wall to a friend in West Germany. She gave it back to me years later with some other letters from this time, as a memory, and I am very thankful she did!

Dear Elisabeth,               – 19th Nov.1989, Schlema
before I sneak into my bed, some few lines. Firstly, many thanks for the Havel-article, maybe nowadays nothing is disappearing anymore? You surely heard what happens here at our side, its coming thick and fast. The euphoria was big. Already at the 10th of November (=it was actually the 11th) we sat in the car to be witnesses in Berlin of the unimaginable to be the truth. Funnily, I wandered through the former Wall, freshly broken through, at exactly 11:11 o’clock. I cannot describe emotions, absolutely impossible. Like many others I fought back my tears. It was so unbelievable, you pass through it as if yesterday, there had not been a death field with mines, electric barbed wires and and and, everybody passed by, just like that, it was totally normal. The reception war equally indescribable. Total strangers hugged each other. Westberliners clapped, everybody laughed and cried. Never in my life I will forget this. Hopefully, it was not too early, I fear an economic catastrophe. In W-Berlin they have already exchange rates of 1:20, what will happen to our GDR-Mark? Hopefully we get over the winter. Apropos, you invited me so often, I would really like to come. I only have time off in December, than again in summer. Would it be possible between 27th and 30th Dec.? If you already have visitors or prefer to be on your own at this time of the year, I of course understand. I would drive in the night and arrive in the morning in FFM. It would be so nice. All the best and greetings to all,
Anke

This was the 7th and last part of my little series of diary entries of the revolutionary autumn 1989. Should you want to read more from me about my time in East Germany, you can read my book „Tearing down Walls“ (original title „Mauern einreißen!“) which only exists in German so far.
Further Information around the Fall of the Berlin Wall ’89: