„Today, today several hours ago the news – border of the GDR opened! Emigration within 24 hours, private trips from today onwards with just 1-2 weeks notice possible. Unbelievable. Big joy? Big sadness, incomprehensible? – Every hour 3.500 emigrants, every hour!! Alas, they all leave us.“
This is the English Version, the German version is HERE.
My Diary notes of 9th November 1989
This is part 6 of my series „My diary – 25 years ago – Autumn 1989“. Earlier parts are linked at the end of this post, as well as documents, old fotographs, and my book „Mauern einreißen!“ („Tearing down walls“ LINK). However, except for the diary parts, all the other pages are in German… I took out some parts which are private, you will recognise this at „(…)“, explanations come in brackets with my initials: „(ADB: explanation)“ or (= explanation). More detailed explanations will be found in footnotes (numbers in brackets) at the end of this post.

Unbelievable. Big joy? Big sadness (2), incomprehensible? – Every hour 3.500 emigrants, every hour!! Alas, all leave us. Is Kuno (=my brother) still here after all? The (people from the) Demokratischer Aufbruch (= oppositional group (3)) went to the border crossings and tried to convince people to stay here. Everybody leaves, in masses, everything breaks down. Continuously new resignations (4), everything is coming thick and fast.

At this radio recorder I heard and taped the news on the East German border at the evening of 9th Nov. 1989

New Year in Italy? (5) How is Sebastian? (6) Such news and he there, inside (=the prison), important times. Historic times. Berlin demonstration of millions unforgettable. Banner slogans contemporary documents. Next to me, Cesar is purring, our 3rd dormitory cat, next to Susi and Detlef. K. is like exchanged, so kind. Ach. We will request a 6 months study interruption to work in the production. We already volunteered to help out in health care as temps. In KMST (=Karl-Marx-Stadt, today City of Chemnitz) they want to “try” to keep up the Dispensaire-care, the DMH (DMH = Dringliche Medizinische Hilfe = emergency care) and the intensive care, all the rest is gravely underserved, the staff barely ever has time off. Will it help to ease the situation for the doctors? Working in a company or an old-age home – good for the people, true, earning some money at the same time for travels. In the summer to the US? Can I afford the passage? M. invites me, such a kind soul! Visiting France? Mediterranean Sea, the Netherlands, all people (=means my friends (7)), Tunisia, Luanda, where to get the vacation days from, where the money?? I have a longing to (go) everywhere, but to come back.
Anke

(1) My brother had filed for emigration and as I already wrote earlier in my diary, I feared to never see him again should he get his emigration approved. Hence the news meant for me something important: my brother is NOT lost, regardless of him emigrating or not, I will be able to see him again! Self portrait, painted with ink at the evening of 9th Nov. 1989 under the impression of the East German border opening and the immediate mass emigration

(2) That with the „big sadness“ today, only few people will understand, but it was indeed like that. I had very ambivalent feelings. The alternative of which I had dreamt, „The Third Way“ of a democratic socialism, which I and many other oppositionals imagined, had all of a sudden become obsolete with the Fall of the Wall. It was apparent that no more masses will go marching in the streets for this goal. Besides this, the news also told of an emigration-tsunami, with an immediately starting mass flight which concerned me a lot. Thats why I was not only happy but also sad at this evening. We had not only fought for freedom of travels but for a bigger whole. When I heard the news of the border opening, I had been drawing self portraits for the subject Life Drawing. My ambivalent emotions are easy to recognize in these pictures, painted with reed pen and ink. They are not very beautiful … but impressive.
(3) The Demokratische Aufbruch (DA) was one of the many oppositional groups in the GDR. It only existed from Oct. 1989 until August 1990 and is mainly known for its personnel issues. Within the GDR opposition, the DA was a rather conservative stream. Its press speaker was e.g. Angela Merkel (yes, its her). Its last president Rainer Eppelmann had not only a seat at the Round Table in Berlin but also became a Minister in the first freely elected government in East Germany in 1990. Rather famous AND notorious was the first president of the DA, Wolfgang Schnur, a lawyer, whos telephone number I also got when I was seeking legal assistance for my friend Sebastian. I called this number many times but since I was lucky, nobody ever picked up. It turned out later, that Schnur was a long time Stasi spy and diligently reported on the inner circles of the opposition. This cost him his job as president of the Demokratischer Aufbruch and made the post available for Rainer Eppelmann. In August 1990, the Demokratischer Aufbruch ceased to exist as an independent party and fusioned with the East-CDU (christian democrates party), which in October 1990 fusioned with the West German CDU. Thats how Angela Merkel came from the Demokratischer Aufbruch to the CDU, her first step towards the Chancellerie… 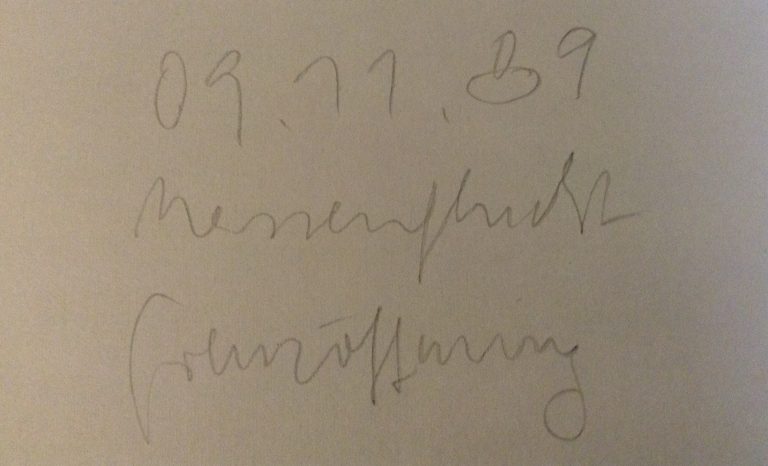 This is the signature at the back of the 6-7 self portraits I created at 9th Nov. 1989, the two words mean: „Mass Flight“ and „Border Opening“

(4) The most important resignation was of course that of Erich Honecker, the president of the Staatsrat, at 18th Oct. 1989, further members of the Politbuerau followed. The culmination point of the bacchanal of resignations was the step down of Erich Mielke, Chief of the Stasi, at 7th Nov. 1989, together with the government around Willi Stoph (president of the Ministers Council). At the next day, the 8th Nov. 1989, the remaining members of the Politbureau of the Central Committee of the SED party resigned. Unforgettable is the (last?) appearance of Erich Mielke in the GDR Volkskammer-Parliament, where he declared in front of laughing MPs (and the rest of the world) that he loved them all… „Yes, I love, I DO love all… all people… I do love…“ The tears are tripping me… (Video – german – on  YouTube). (5) I had a pen friend in Italy who had invited me many times to visit him in Padua. Now, a visit seemed possible.
(6) Sebastian has another name in real life. A friend of childhood days who was imprisoned in Halle. I had pretended to be his fiancée in order to get writing and visiting rights. There had been protests in early October in that prison too, of which he wanted to inform me in his smuggeled letter. He was caught red handed (see Part 4 and 5 of this series) and suffered tightened confinement conditions. (7) In all these countries I had pen-friends. I had many such letter-based-contacts, since for me, this was a kind of travelling and an option for a cultural and language exchange. When all of a sudden we were granted free movement, my head was buzzling with all opportunities. I had so many potential invitations, so many access points, so many potential travel destinations, that I started to pragmatically consider where to go and where to take the time and money from in order to actually do it. With this, I realised for the first time, that freedom to move is in itself only a theoretical possibility (to start with). My next summer holiday brought me indeed with a Trabbi (=Trabant, small and typical East German car) to the french Normandie and with PanAm (a big airline at that time) to the USA, to my friend M. With her, I drove by car from Massachussets through 11 Federal States, down to Tennessee to her bread-baking uncle. On our way back we marvelled at the Niagara Falls, I visited Boston and New York City. There, I saw the first homeless people in my life, right at the bus station, amongst them younger women, sleeping on card boards. This image haunted me for a long time.

This was the 6th part of a small series of diary entries from autumn 1989 in East Germany. Further posts will follow in the next days. Should you want to read more from me about my time in East Germany, you can read my book „Tearing down Walls“ (original title „Mauern einreißen!“) which only exists in German so far.
Further Information around the Fall of the Berlin Wall ’89: